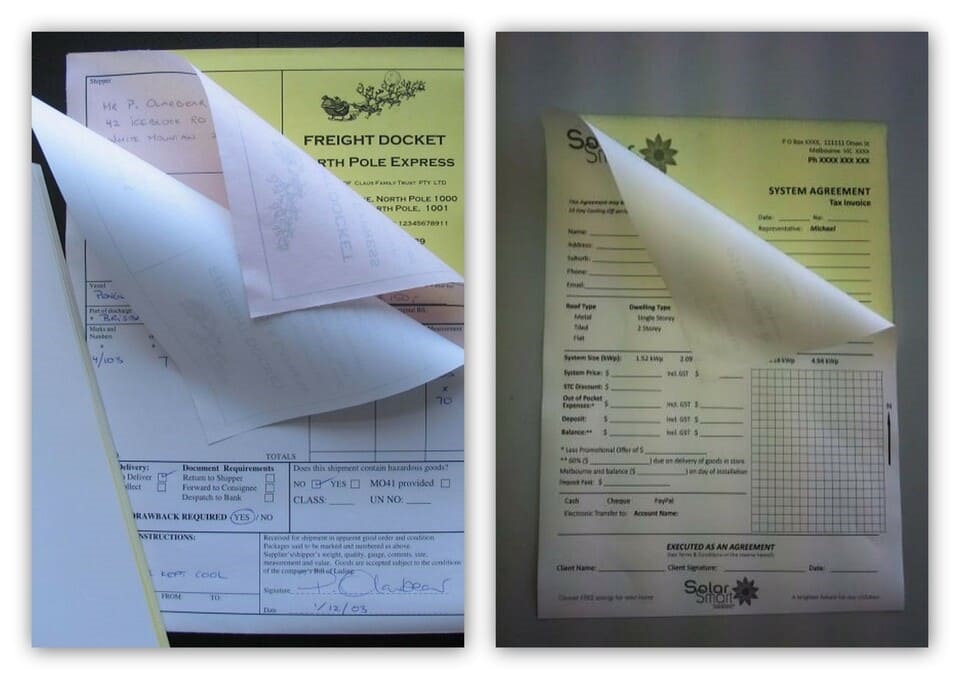 Carbonless paper is used to make copies of a document manually, without the use of printers. It consists of the top sheet and one, two, three or more sheets under it. When you write on the top with a pen, the text or image is instantly transferred to the sheets below. This is possible because of the special coatings these sheets have. They are made of chemicals that react when they get in touch, and as a result, the text or image is created on the sheets beneath. The carbon paper works in the same way. However, it is the less preferred option nowadays. Let’s take a look at why.

The carbon paper was the first type of paper introduced to the world that could create copies without the use of any electronics. Its coat consists of a dark, ink-like chemical that contains carbon. To write on it, there is a need of an additional sheet that you put in between the original and blank sheet where the text should appear. While writing on the top sheet, the pressure from the felt-tip pen transfers ink onto the blank sheet. The result is a carbon copy of the document.

The Carbon paper’s appearance is traced back to the 19th century when it was created to be a patent for a stylographic machine. Later on, the machine was developed, and its new shape, it was known as a typewriting machine.

On the other hand, the carbonless paper, which is also known as Non-Carbon Paper appeared as a better alternative to the carbon solution. What makes it better is that it is stain-free and biodegradable, which makes it an eco-friendly solution. It doesn’t require an additional sheet to put between the top sheet and the others underneath it. Because the top sheet is usually white while the others that produce the copy are in different colours. In this way, you can create duplicates, triplicates or quadruplicates.

Both of the types are used to produce copies of receipts. Also, they are used to transfer invoices, service tickets and purchase orders. The paper itself is used by artists as a surface for painting as well.

It is undeniable that the carbon paper has some unique uses, though. Usually, its use can be seen by police officers who use it for evidence vouchers. Also, in correctional facilities, prisoners write their letters and notes on carbon paper so that the prison can keep a copy of it. Moreover, banks are using them daily.

However, carbonless forms seem to replace the carbon paper steadily. It is used for quotes, applications, legal forms and proposals as well as delivery forms more and more, every day. And the best part is that it is environmentally friendly.

Today, many carbonless paper suppliers produce carbonless books which consist of pre-printed layouts of business forms so that the invoices, purchase orders or delivery documents can have a consistent and professional look. These books are extremely useful for offices and people handling the purchasing processes because it saves them time, energy and money.