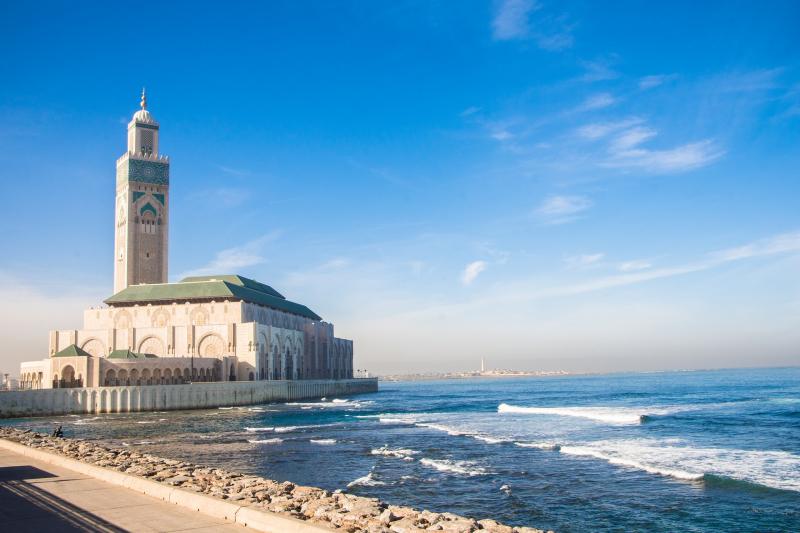 Casablanca City Tour: Travelers visiting Morocco are enchanted by the varied architecture, the Medinas on cobbled streets, the dazzling sands of the Sahara, and the stunning snow-capped Atlas Mountains whilst staying in brilliant Riads (traditional homes sometimes converted to hotels that have unique courtyards that conveniently ventilate the structure) on lush gardens in a labyrinth of culture, history and beauty. Surely Westerners have heard of the film Casablanca, the romantic 1942 film starring Ingrid Bergman and Humphrey Bogart. It takes place in the enticing city in northwest Morocco.

What some of us do not know is Morocco has four “Imperial Cities” – each having been capital at least once and several times for a couple. They are, in no particular order: Fes (Fez), Marrakech, Rabat and Meknes. Interestingly, Casablanca isn’t necessarily the most captivating city to visit. To the north of Casablanca, and also on the shores of the Atlantic, is the current capital of Rabat.

Rabat (meaning “fortified place” showcasing its prominent military importance) has a lesser population than Casablanca – slightly over one million inhabitants. It has a heavy French influence and houses the King and embassies. Its main languages are Arabic and French. Most Morocco Private Tours go to the abandoned mosque (the Almohad ruler who started it died) with the incomplete Hassan Tower which is about half the intended size -approx 140 ft. Also commonly visited are the Royal residence (Dar-al-Makhzen), Pietri Square, the Bouregreg Marina.

The Kasbah of the Udayas, the Rabat Archaeological Museum and the Riad district. Stop at a zoo (Zoo de Rabat), the gorgeous Andalusian Gardens or perhaps Les Jardins Exotiques de Bouknadel, the Mausoleum of Mohammad V, the Museum Mohamed VI of Modern and Contemporary Art, and the must-visit Chellah, an ancient Roman ruin. The weather and food are blissfully Mediterranean, therefore beach activities and lounging are constant go-tos.

Meknes, partially surrounded by ancient walls encompassing exquisite gates (such as Bab Mansour) considered some of the best-preserved of the Islamic world, was capital from 1672-1727. It is about 80 miles inland from Rabat and is a bustling, though less populated and noticed, city that some feel is easier to navigate. Intended by its creator, Moulay Ismail, to rival Versailles, a lot of it (including the walls) was leveled by an earthquake in 1755. The prices here may be more reasonable and the people more friendly.

Some noteworthy sights are the Bou Inania Medersa, the Mausoleum of Moulay Ismail, Dar Al-Makhzen, Jamai Palace (inside is the Museum of Moroccan Arts) and the El Hedim Square (Place El Hadim) providing entertainment such as snake-charmers, story-tellers, horse riding and medicine men. Nearby are souks and famous confectionary merchants. Fortifications were key to Ismail so there is an impressive stable (for 12,000 horses!) and granary. Maybe stroll through Moulay Idris if you have a good sense of direction. Take a guided tour through the rolling hills to the nearby amazing Roman ruins of Volubilis, perhaps the best preserved ruins in northern Africa.